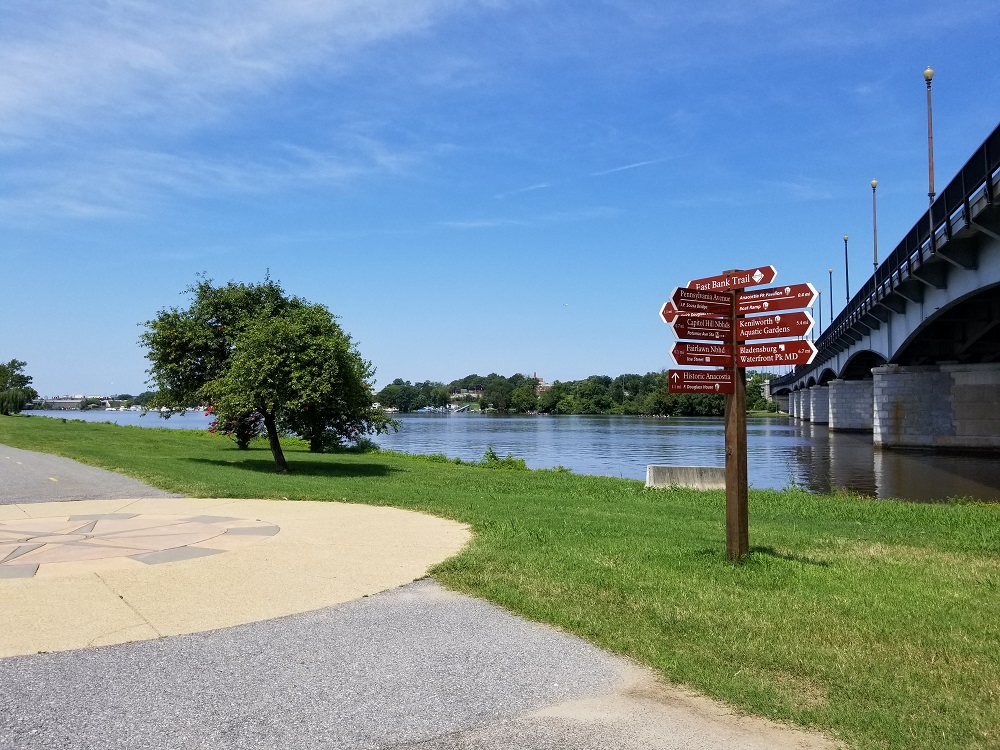 The Anacostia Park is a waterfront park with walking/biking trails, picnic and sports areas, a roller rink, and the Aquatic Resources Education center. Several bridges give access to bikers and walkers across the Anacostia river including the Sousa and Douglass Bridges.

On the east side of the Anacostia, follow the Anacostia Park Bike Path past Kingman Island, Kenilworth Aquatic Gardens and up to Bladensburg Waterfront Park.

Along the Anacostia Park Bike Path learn about the history of the area by stopping at the artistic signage created under the direction of artist Tendani MpulubusiEl with assistance from students at Eastern and Ballou High Schools.

From the sign: “The Washington Navy Yard is the oldest shore establishment of the U.S. Navy. It was the scene of many scientific developments including a ship model testing basin that evaluated the effect of water on new hull designs. The first shipborad aircraft catapult was tested in the Anacostia River in 1912 and a wind tunnel was completed at the Yard in 1916.

By World War II, the Navy Yard was the largest naval weapons plant in the world. The ammunition, artillery and shells designed and built there were used in every war the United States fought until the 1960s. Today, the Navy Yard serves as headquarters for Naval District Washington and houses numberous support activities for the fleet and aviation communities.”

From the sign: The “Freedmen’s Bureau” acquired 375 acres of land that was originally a tobacco plantation from the Barry Family in the late 1800’s. In 1867, the land was named Hillsdale by African Americans who came to Washington in great numbers before and during the Civil War. From there, a thriving community of formerly enslaved and free persons was established. The acreage was subdivided and sold, and the proceeds went to fund the start of Howard, Lincoln and Wilberforce Universities.

Frederick Douglass, an internationally known abolitionist, orator, writer and statesman, was very active and engaged in the affairs of this community. After escaping from slavery, he became a leader of the abolitionist movement. In the 1870s, he broke the restrictive all-white land covenant that prohibited the sale of land and homes in Anacostia to African Americans by purchasing his prestigious home on Cedar Hill.

From the sign: Over the past 400 years, the Anacostia watershed has changed from a lush, diverse ecosystem to one shaped by trade, agriculture and a rapidly expanding population. In the 1700s, forests were cleared to make way for cropy cultivation, which caused sedimentation that clogged the river and ports.

The Nacotchtank were American Indians who lived in the area now known as Washington, D.C. Also called theNecostins, their principle village was located on the eastern bank of a small river that still bears an anglicized version of their name – the Anacostia. The name Nacotchtank is said to mean “Trading village”. Historians estimate that American Indians lived in this river for 10,000 years.

The first European explorer was Captain John Smith who sailed the Anacostia in 1608 while surveying the region’s navigable waters. His visit opened the door for subsequent European settlement which led to changes in land use that dramatically altered the watershed.