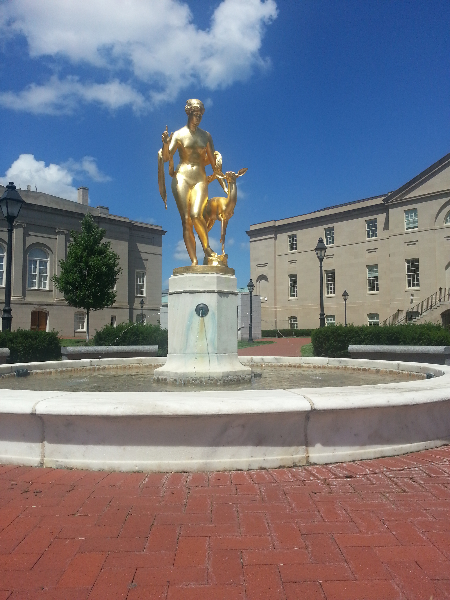 This little statue to a prominent Washington attorney by a prominent sculptor caused quite a stir when it was unveiled. There is very little written about the inception of this memorial, but it only took 3 years to erect — practically a record in terms of memorial placement.

Joseph James Darlington was born in Due West, South Carolina. He moved to Washington, D.C., in 1875 and began practicing law. He was very active in the community and served as the dean of the local bar; a member of the joint citizens committee on suffrage; president of the City Orphan Asylum; a member of the Fifth Baptist Church and a member of the boards of directors of the Washington Loan and Trust Company and the Federal National Bank.

At the time of his death on June 24, 1920, Joseph J. Darlington had been an attorney in Washington, D.C., for 46 years. He was buried at Oak Hill Cemetery (Georgetown) after funeral services at the Fifth Baptist Church. Judges of District courts, member of the local bar association and committee members from the Southern Society of Washington attended the ceremony.

After his death the Board of Directors of the Washington Railway and Electric Company and the Potomac Electric Power Company adopted resolutions of respect for Darlington, saying: ‘His intellect was of the highest; his love for humanity unbounded; his truthfulness was unquestioned; and his honor was flawless. In his passing a glorious example of all that is best and worthwhile has been made clear to all of those who knew him.’

The Southern Society of Washington, of which Darlington was a member, also passed a resolution, that stated, in part: ‘In the death of Joseph James Darlington the District of Columbia loses one of the most distinguished lawyers at its bar and the South a son who has attained high distinction.’

So his friends got together and lobbied to have a memorial placed in Washington in Darlington’s memory. In 1922, Senator Brandegee of Connecticut introduced a resolution in Congress to erect a statue in memory of Darlington. The resolution stated that no appropriations were to be provided for the memorial and that the statue couldn’t be placed on the Mall or the Capitol grounds. The resolution passed 17 days later.

[Show slideshow]
The memorial consists of a gilded, nude “Maiden and Fawn” on a marble water fountain. It was the first sculpture by Jennewein to be displayed in Washington, D.C. It was praised at the Architectural league in New York in 1922, and in Baltimore in the spring of 1923, where it was on display before being moved to Washington in November 1923.

However, immediately after the unveiling the sculptural group was being criticized.

According to a piece in The Washington Post by Josephine Tighe, the criticism was less about the art of the sculpture, or the the fact that the maiden was nude, and more about the appropriateness as a memorial. A well-known sculptor at the time, Ulric J. Dunbar, called it an “inane representation,” and then continued by saying that there is “…no symbolism that is apparent to an intelligent public. Works of art, and especially memorials, should symbolize the outstanding characteristics of the person commemorated and should carry these characteristics so plainly told that the ordinary passerby could interpret them. I knew Mr. Darlington very well and the statue, as it stands, is meaningless, so far as this able lawyer and kindly gentleman is concerned.”

In the same article, Frank Hogan, who served on the executive committee for the memorial, defended the memorial saying: “It was decided that a memorial symbolical and beautiful would not only serve to commemorate Darlington, but would be an adornment to one of the parks in the Nation’s Capital long after those whose good fortune it was to know him and what he looked like has passed away.”

“The memorial,” said Hogan, “consists of a marble fountain surmounted by a group, consisting of a maiden and a fawn, in which the artist has sought to symbolize humanity at its best.”

The statue was taken down and cleaned during the renovations of the Courthouse between 2002 and 2009.

Committee is named to honor Darlington: Fountain will be Dedicated in Judiciary Square this Month. The Washington Post, November 6, 1923