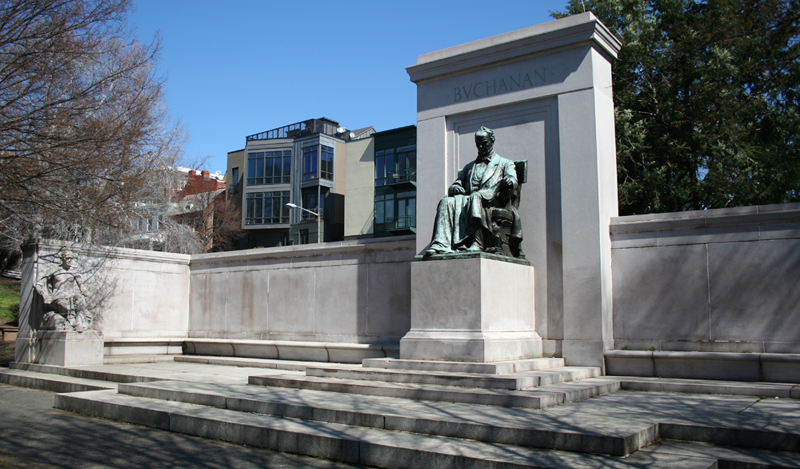 Buchanan was born in Franklin County, Pa., on April 23, 1791, and died March 1867 at Wheatland in Pennsylvania. His public service career included being both a U.S. Representative and a Senator, serving as Minister to Russia, Secretary of State under Polk, and Minister to Great Britain under Pierce. His tenure as President is marked by strife in the Kansas Territory, the Dred Scott Supreme Court case, and the lead up to the Civil War.

During Buchanan’s service as President, his niece, Harriet Lane served as White House hostess. President Buchanan, who never married, was her uncle and guardian after she was orphaned at the age of eleven. When Harriet Lane Johnston died in 1903 her will included a bequest for a statue honoring her uncle.

The controversy over erecting a memorial statue for James Buchanan in Meridian Hill Park began immediately. For 15 years Congress debated  or ignored voting about the statue. The bequest had to be accepted by the United States by July 2, 1918 or the monies would revert to other purposes. And it took until 1918 for Congress to resolve to allow a statue in Buchanan’s honor, and then another 10 years to finish the memorial in Meridian Hill Park.

At issue was the question of Buchanan’s loyalty to the Union during his presidency, which immediately preceded Lincoln’s.

Leading the dissent was Senator Henry Cabot Lodge (R.,-Mass.) who stated, “This joint resolution proposes at this moment, in the midst of this war, to erect a statue to the only President upon whom rests the shadow of disloyalty in the great office to which he was elected.” Lodge also argued that was no excuse for erecting a statue to a man like Buchanan in the Capital City that at the time had no memorial to such Presidents as the John Adams, who signed the Declaration of Independence; Thomas Jefferson, founder of the Democratic Party, and Madison, Monroe and John Quincy Adams.

In the meantime the fine arts commission had approved the final model of the Buchanan memorial in 1916. So, on June 17, 1918 the Buchanan statue site was passed in the Senate by a vote of 51 to 11. The House of Representatives had passed a resolution for the statue on February 20, 1918 by a vote of 217 to 142.

Controversy continued for another 10 years with many citizens arguing against a memorial of any kind.

The Buchanan Statue was unveiled on June 26, 1930. According to reports, President Hoover and a group of diplomats and government officials attended the unveiling and dedication for the memorial to James Buchanan on June 26, 1930.  And the formal presentation of the statue was made by Roland S. Morris, former ambassador to Japan. The ceremony was not open to the public.

Upon unveiling the statue a dozen carrier pigeons were released from a lower pavilion, and the ceremony ended with the playing of “Taps”.

In his presentation of the statue to the nation, Roland S. Morris declared that over time, “[Buchanan’s] qualities as a statesman became apparent, and we now recognize him as one of our truly great men.”

Buchanan was called the first of the log-cabin presidents that included Lincoln, Johnson, and Grant. Of these four, three have statues in the nation’s capital.