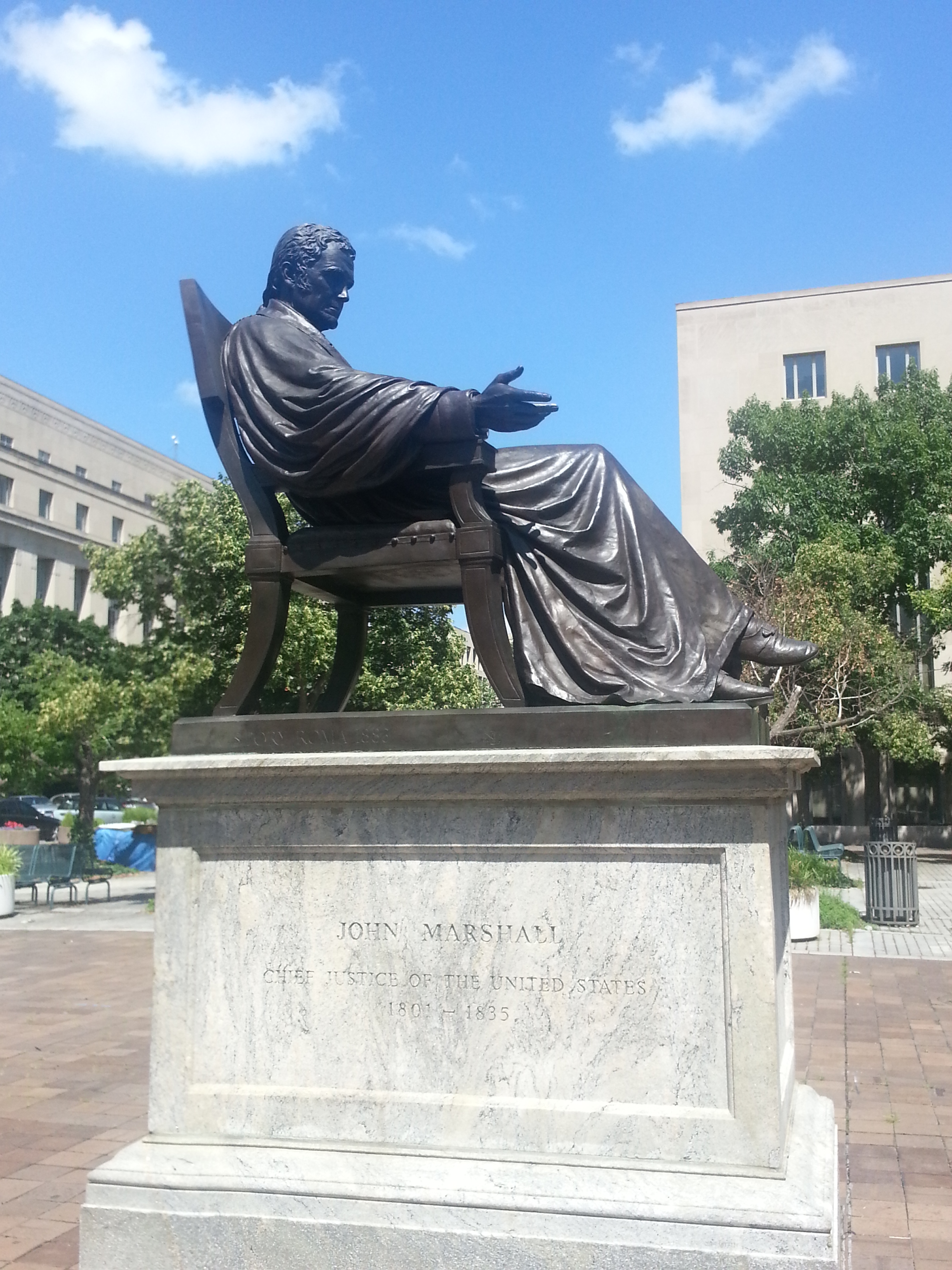 The $3,000 was not sufficient to support the design and creation of a monument and was therefore invested in city bonds of Philadelphia with subsequent accrued interest reinvested in bonds.

It was at this time that there was a discovery in Philadelphia of the Marshall memorial fund.

45 years had passed since the Marshall memorial committee had collected $3,000 dollars from Philadelphia bar members. When the committee had deemed that amount insufficient for the purposes of building a memorial, the funds had been put aside and into a fund package. By the time the Congressional resolution for a national memorial to John Marshall passed  the funds had increased in value to $20,000. The funds were re-designated for the memorial.

Congress passed the resolution for a memorial on March 10, 1882, with Congress appropriating $20,000 and the Philadelphia bar donating $20,000 for the memorial fund.

The bronze statue of John Marshall first Chief Justice of the United States, was unveiled on the Capitol grounds on May 10, 1884. The statue was originally placed on the foot of the west entrance of the Capitol.

In 1940 the House of Representatives suggested transferring the John Marshall statue from the Capitol grounds to a site near the new Supreme Court building, but the statue wasn’t moved until 1982. It was moved to the Supreme Court Building in February 1982. The statue depicts John Marshall seated in a chair wearing a judicial robe that drapes to his feet. His hand is outstretched as if he is delivering an opinion. The front of the base bears the inscription:

Erected by the members of the bar and Congress. A.D. 1884

The sculptor was William Wetmore (W.W.) Story, whose father Joseph Story served as a Supreme Court Justice and was known as one of the first great legal writers.

According to the W.W. Story, “The subjects are allegorical, one representing Minerva dictating to Young America, seated at a table, the constitution, while beyond Minerva, to the right, are two seated figures, representing Philosophy and Jurisprudence and Infant America. On the other side are Commerce, Education bringing forward a young boy, Agriculture — eight figures in all.

The other subject is Victory bringing forward young America to swear allegiance on the altar of the union, on which she deposits her sword and lance, while on the other side of the altar stands Religion pointing upward and beyond her is Justice and Equity. Beyond these Age, a dignified old man is seated, and Youth, a young girl, is leaning upon his shoulder. On the other side, and beyond America, is the seated figure of an Indian, sadly contemplating the former, representing the aboriginal inhabitant over with Victory and America have triumphed.” 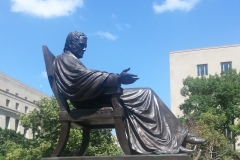 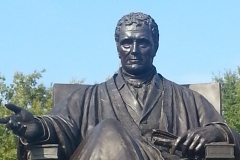 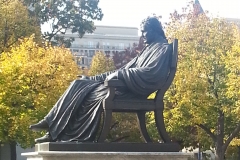 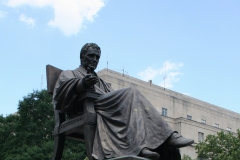 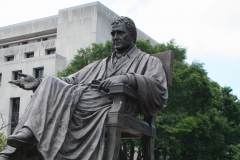 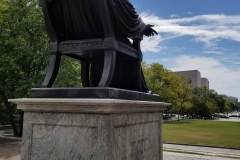 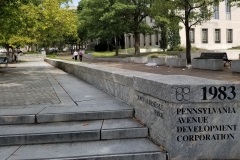 In the 1980s the Pennsylvania Avenue Development Corporation (PADC) commissioned several parks, and other construction, along Pennsylvania Avenue including John Marshall Park, situated at 4th and Pennsylvania Avenue, NW. The area that made up the park had been residential with row houses and hotels in the 19th century, which were razed in 1969. Marshall had lived in that neighborhood when he worked in Washington, D.C.

The park is made up of three “platforms” defined by paved walkways, trees, and grass with seating creating borders. There is a sundial in the park, which was a replica of a sundial John Marshall had at his in Richmond. The park also has fountains with bronze lily pads, fish, frogs and dragonflies.  Along the seating of the middle park are two seated, bronze chess players designed by Lloyd Lillie.

John Marshal Memorial Park is 2 acres, cost $2.5 million to construct, and was completed in 1985.

In the final park plans a statue of John Marshall was approved for the park. The statue  is a duplication of the Marshall statue originally located in front of the west-side of the Capitol, and now housed in the Supreme Court building. The statue pedestal is 6 feet high and made of the same granite as the walls in the park. The pedestal was supposed to have the same moldings as the original design. It does not.

John Marshall was born in Fauquier county, Virginia on September 24, 1755. He fought in the Revolutionary war and became a captain in 1777. He was at the battles of Brandywine and Germantown and fought at Monmouth. In 1782 he was elected a member of the Virginia house of delegates from Fauquier and began after the war ended. Marshall and James Madison (4th President of the United States) took part in the Virginia convention to accept the constitution.

He later served as a representative in Congress, as an envoy to France and as Secretary of State. In 1801 he was nominated as Chief Justice of the United States, and the Senate unanimously confirmed his appointment. He served as Chief Justice for 34 years. he died in Philadelphia on July 6, 1835, and buried near his wife, Mary Ambler, in Richmond. VA.

Perpetuated in Bronze: Unveiling of the Statue of Chief Justice Marshall. The Washington Post, 11 May 1884.