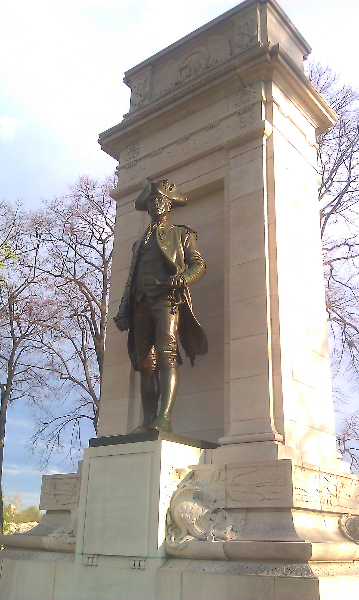 John Paul Jones was a Scottish sailor and the United States’ first well-known naval fighter in the American Revolution.

In June 1909 Congress appropriated $50,000 for a statue of Commodore John Paul Jones, and the Memorial Commission decided to locate it in the small circle in Potomac park at the foot of Seventeenth Street, north of the tidal basin.

Originally it was hoped that the statue would be dedicated in 1911, but the Commission didn’t like the initial design of the ship in which Jones is standing and that part of the statue had to be redesigned. The statue was designed by Charles H. Niehaus. The final design was finished in a building at Seventeenth and E Streets, and was unveiled in 1912.

The memorial consists of a marble pylon of classical design that is a background for a colossal bronze figure of the naval commander. The pylon is 15 feet high and occupies the center of an ornamental fountain at the north entrance to Potomac Park. Water for the fountain comes from the bronze heads of dolphins at each end of the pylon. On the back of the memorial will be placed a large bas relief panel of Jones raising the American flag on the warship Bonhomme Richard.

The statue of John Paul Jones stands 10 feet high, and shows him in what is considered his most famous stance – it represents the naval hero standing in a characteristic attitude on the deck of a warship. It was accordingly decided to ask the artist to remodel that feature of the base of the statue.. He is shown in full uniform with his right hand clenched and his left hand grasping the hilt of his sword.

The pageant which will be under the director of Brig. General Robert X Evans will probably march by way of Penn to 17th street. Admiral Dewey will pull the unveiling cord. The Rev. Charles Wood, pastor of the Church of the Covenant will pronounce the invocation.

The memorial dedication included a martial pageant, which was composed of cavalry, artillery, and infantry regiments of the United States army, marines, sailors, and officers of the Navy, and the District National Guard, that provided military honor, and prominent speakers who gave eulogies upon Jones life and achievements. President Taft and General Horace Porter, former United States Ambassador to France, to whom the credit for restoring the bones of the hero of his country is given, will be the principal speakers.

In 1919, a resolution was approved to allow the D.C. Society of the Sons of the American Revolution to place a tablet at the base of the John Paul Jones statue. The tablet unveiling ceremony was held in 1920.  The tablet is inscribed with a statement John Paul Jones delivered to the Marine Committee of Congress on September 14, 1775, outlining the proper attributes of a good naval officer:

It is by no means enough that an officer of the Navy should be a capable mariner. He must be that, of course, but also a great deal more. He should be as well a gentleman of liberal education, refined manner, punctilious courtesy and the nicest sense of personal honor.  He should not only be able to express himself clearly and with force in his own language, both with tongue and pen, but he should be versed in French and Spanish. He should be the sold of tact, patience, justice, firmness and charity.

In 1927, in observance of the 180th anniversary of the birth of John Paul Jones, exercises were conducted at the statue by the Sons of the Revolution. A wreath was placed at the base of the statue by Assistant Secretary of the Navy for Aeronautics Edward P. Warner.

To Honor John Paul Jones: Monument will be erected here in Summer of 1911, The Washington Post, March 6, 1910