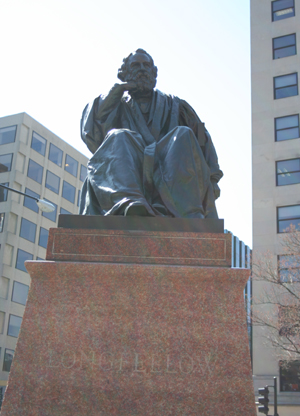 It took twelve years for the Longfellow National Memorial Association to erect a monument to Longfellow who was considered one of America’s greatest poets, and the first in Washington, D.C. to honor an American literary figure. In 1897 the Longfellow National Memorial Association was organized with Chief Justice Fuller as president. Congress gave the site of Connecticut Avenue and M Street/Rhode Island Avenue, for the statue and contributed $4,000 for the pedestal. The remainder of the $25,000 was raised by subscription.

The dedication ceremony was held on May 7, 1909. Members of the diplomatic corps, descendants of Longfellow, and, standing in for President Taft, Attorney General Wickersham. Seats for 700 people were set-up on the Connecticut Avenue side of the park, and spectators filled the streets. 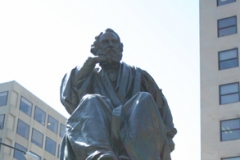 The presentation of the statue was made by Brainard H. Warner, treasurer of the Memorial Association, and the acceptance on behalf of the nation was by Attorney General Wickersham. During the ceremony there was a series of flags surrounding the statue with titles of Longfellow’s poems. The Marine Corps band played and there were addresses on Longfellow’s life, his poetry, and his contribution as a citizen.

The statue was the first full-sized statue of Longfellow. The statue represents Longfellow with a book in hand, and is placed on a block of Bonacord granite brought from Sweden and carved in Scotland.

Bishop Mackay-Smith, chairman of the executive committee of the memorial association, described the creation of the committee and discussed Longfellow’s influence, saying, that ‘his works are his lasting monument, and his memory is in the keeping of those whom his song has charmed and blessed.’

Chief Justice Fuller, of the United State Supreme Court, and then president of the Memorial Association, presided over the unveiling ceremony.

To capture some of the feelings expressed I have shared a quote from Bishop Mackay-Smith’s address:

“The gratitude of many of England’s best and noblest has placed his image among her own honored dead in the shadowed seclusion of Westminster’s poets’ corner. Now, and we trust forever, here in the Capital of the country which he loved, and of which he wrote so magnificently in that picture of ‘Ship and State,’ which shall never die, the beautiful face and the kindly eye shall live, let us hope forever; but his works are his lasting monument, and his memory is in the keeping of those whom his song has charmed and blessed.”

At the time, one of his most-beloved poems was Sail On, O Ship of State, which includes the lines:

Thou, too, sail on, oh, ship of state;
Sail on, oh, Union, strong and great!
Humanity with all its fears,
With all the hopes of future eyars,
Is hanging breathless on thy fate!

Today, however, Longfellow is probably best be remembered for Paul Revere’s Ride, which begins:

Listen, my children, and you shall hear
Of the midnight ride of Paul Revere,
On the eighteenth of April, in Seventy-five;
Hardly a man is now alive
Who remembers that famous day and year.

In 1940 the 133rd anniversary of the birth of Henry Wadsworth Longfellow was observed with a ceremony at the statue’s triangle park. In 1967 the National Park Service redesigned the park to include sidewalks, a water foutain, and benches. In 1977 Metro initiated it’s Poetry and Art program – a display in Metro buses of 10,000 colored posters each showing illustrated verse – in front of the Longfellow statue.