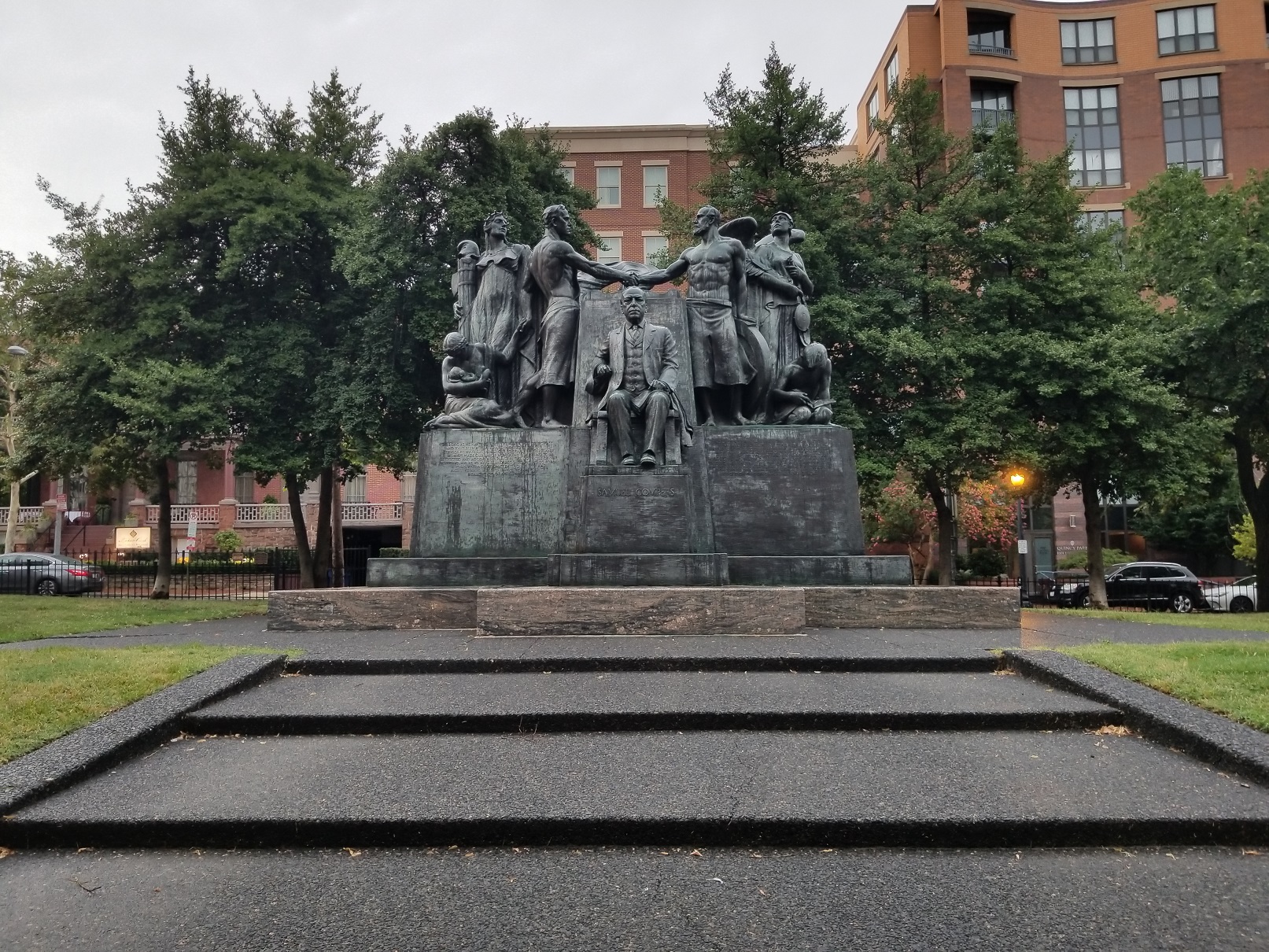 Samuel Gompers was born in England where he was educated. When he was 13 his family moved to New York City. His father was a cigar maker, and Samuel became a cigar maker, too. At the at of 14 Gompers became involved with the Cigarmaker’s Local Union. In 1875 he was elected president of Cigarmaker’s International Union Local 144.

In 1881, Gompers helped found the Federation of Organized Trades and Labor Unions, which was, in 1886, reorganized into the American Federation of Labor. Gompers was elected the first president of the AFL. He served as president, except for one year, until his death in 1924.

This memorial was designed by Robert Aitken of New York City for the triangular plot of land at Eleventh street and Massachusetts avenues, near the original AFL headquarters. The statue construction began in 1931 after Aiken’s plans were approved.

Interestingly when the memorial was being pieced together there was a dispute with the iron workers. The union of iron workers had recently created a four-hour day for iron workers in order to employ twice as many men. Essentially the 8 hours shifts were split. In order to get the work completed on the Gompers memorial but also on the Archives building, the Department of Justice and the Government heating plant – all being constructed at the same time – exceptions were made to the new union rules.

The Gompers Monument is a group of statuary, with some figures in bronze. It is 16-feet high. In the middle of the memorial is Samuel Gompers. He is surrounded by symbolic statues representing labor, the home, education, justice, and liberty. The two figures behind him represent labor greeting each other, Justice and Liberty are standing behind Labor, and a mother kneeling with a baby represent “Home.”

The memorial cost approximately $100,000 raised by the memorial foundation.

The ceremony was held at 10am Saturday, October 8, 1933, with President Franklin D. Roosevent and William Green, president of the American Federation of Labor, addressing the crowd. There were about 8,000 people who attended the unveiling.

President F.D. Roosevelt began his address to the crowd by saying,

“It is fitting that in the Capital of the Nation a statue should stand through the ages, to remind future generations of the services to that Nation of a patriot who served his country well.”

He concluded by saying,

“Like the duly constituted officials of your Government, we must put and we are putting unselfish patriotism first. That would have been the order of Samuel Gompers is he were with us today.”