The Shevchenko statue was unveiled during the 150th anniversary of the poet’s birth. The anniversary was also marked in the Soviet Union with festivities and the unveiling of a Shevchenko statue there. Sponsored by anti-Communist Ukrainian-American groups, the Shevchenko memorial was opposed by many Americans on the grounds that the poet was both anti-Semetic and the idol of the Communist Party.

The statue was approved by the Senate in September 1960, and was to be built at no expense to the Federal Government. The controversial statue of Taras Shevchenko, the 19th century Ukrainian poet, was put in place in early June 1964 at the triangle park at 22nd and P Streets, NW. The unveiling happened a couple of days later. 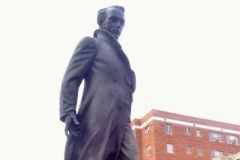 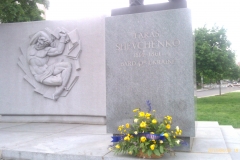 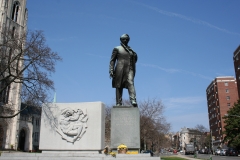 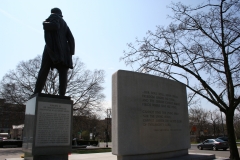 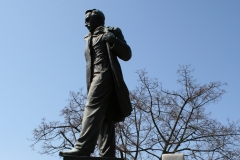 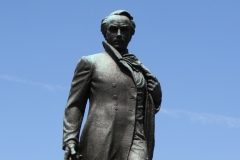 The opposition to the statue was loud and long – with editorials flooding The Washington Post for months before the unveiling, and even The Washington Post editorialized against it. The statue was opposed for many reasons including the fact that Shevchenko was not an American; that he was an anti-Semite; and that he was an idol to the Communist Party.

“The erection of a monument to this obscure Ukrainian who sole contribution to the United States was, so far as I can determine, a vociferous group of followers, was no doubt unavoidable because of the political implications involved.”

The statue dedication took place on Saturday June 27, 1964, at 1pm, after a parade from the Ellipse. Over 36,000 took part in a weekend of festivities that included concerts throughout the city and a parade on Saturday. At the unveiling, former President Eisenhower spoke at the ceremonies. Eisenhower, who had signed the September 1960 bill that provided for the erection of a monument to Shevchenko, praised his poetry and his fight for freedom.

Taras Shevchenko was born a serf in Moryntsi, Ukraine in March 1814, he gained his freedom at the age of 24, and become the Ukraine’s best known and most loved poet. He dedicated his life to defending the rights of peasants bound in serfdom. His most famous book of poems is Kobzar (The Bard) published in 1841.

There are two distinct parts of the memorial. The statue of the poet with this dedication:

Dedicated to the liberation freedom and independence of all captive nations.

This monument of Taras Shevchenko, 19th Century Ukrainian poet and fighter for the independence of Ukraine and the freedom of all mankind, who under foreign Russian imperialist tyranny and colonial rule appealed for the new and righteous law of Washington was unveiled on June 27, 1964. This historic event commemorated the 150th anniversary of Shevchenko’s birth. The memorial was authorized by the 86th Congress of the United States of America on August 31, 1960, and signed into Public Law 86-749 by Dwight D Eisenhower, the 34th President of the United States of America, on September 13, 1960. The statue was erected by Americans of Ukrainian Ancestry and Friends.

The second part of the memorial is a granite slab with an artistic depiction of man breaking the chains of bondage, with this poetic quote on the back of the slab:

…Our soul shall never perish. / Freedom knows no dying. / And the greedy cannot harvest / fields where seas are lying: /

The Shevchenko memorial has another distinction, the discussions on the approval on the memorial were the impetus for the director of the National Park Service to call for the curtailing of statuary in Washington, D.C.

Shevchenko Statue Ready for Pedestal, The Washington Post, May 30, 1964.

Ukranians Make Eisenhower Feel ‘Like I Were Back in Politics’, by Phil Casey, The Washington Post, Jun 28, 1964.