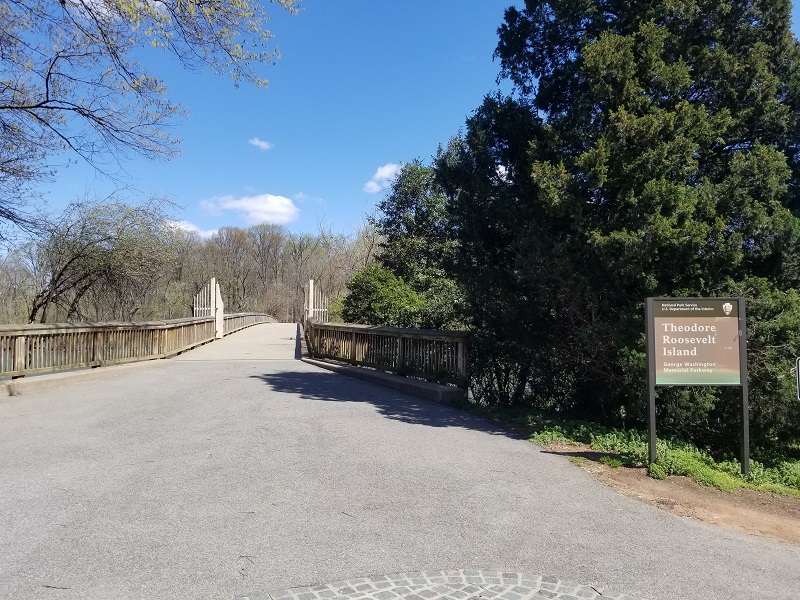 Theodore Roosevelt Island, named for the 26th President, is the largest presidential memorial in D.C., in terms of acreage. It is an island in the middle of the Potomac River, and is located in Washington, D.C., because the Virginia state line begins at the southern shore of the Potomac.

The park is managed by the National Park Service as part of George Washington Memorial Parkway. Most of the island is a natural park with over 2 miles of trails. The 88-acres of natural area is very diverse and includes upland forest, swamp, and tidal marsh. In the center of the park is a memorial plaza featuring a statue of Roosevelt.

Congress authorized the memorial on May 21, 1932, but did not appropriate funds until 1960.

The memorial was dedicated on October 27, Theodore Roosevelt’s birthday, in 1967. It cost $1.4 million.

The plaza is surrounded by a water moat and is paved with granite. On the east and west side of the plaza are two fountains. Around the plaza are walkways with access to the nature trails. Flanking the memorial plaza are four 21-foot-high granite slabs engraved with Roosevelt quotes.

The statue shows Roosevelt with one armed raised in “characteristic speaking pose,” and without glasses.

Short history of the island

The Nacotchtank Indians named the island “Anacostine” and some references refer to the island as Analostan Island.

In 1748, the land was acquired by George Mason IV, author of the Virginia Bill of Rights, who handed it down to his son John Mason. John Mason developed the island as a plantation estate and built a causeway connecting with the Virginia coast and a large Federal-style mansion, also named Analostan. The Mason family left in the 1830s.

During the Civil War, Union forces occupied the island. In the summer of 1863 the island functioned as the camp of the 1st United States Colored Troops, an African American regiment. From May 1864-June 1865 a freedmen refugee camp occupied much of the island.

From 1913 to 1931, the island was owned by the Washington Gas Light Company, which didn’t maintain the environment on the island.

In 1931, the Theodore Roosevelt Memorial Association purchased the island from the gas company with the intention of erecting a memorial honoring Roosevelt.

The following year it gave the island to the federal government, but maintained planting and development rights.

The Olmsted Design and restoring the natural plantings

The Theodore Roosevelt Memorial Association hired the famous landscape firm of Olmsted Brothers. From 1934 to 1937, Olmsted directed the Civilian Conservation Corps in clearing the island of most non-native vegetation and planting about 20,000 native hardwood trees and shrubs.

Theodore Roosevelt served as the 26th president of the United States. He was also influential in the conservation movement in the early 20th century, and was a hunter, taxidermist, soldier, ornithologist, and author. He studied natural history at Harvard.

As president, Roosevelt provided federal protection for almost 230 million acres of land. He sat aside 150 national forests, the first 51 federal bird reservations, five national parks, the first 18 national monuments, the first four national game preserves and the first 24 reclamation, or federal irrigation, projects, designations that were bitterly opposed by commercial interests. Roosevelt also appointed as the first Chief of the U.S. Forest Service the visionary Gifford Pinchot, who shared his philosophy of natural resource conservation through sustainable use, and he convened four study commissions on conservation for policymakers and leading authorities to shape thought about the then-new field of conservation.