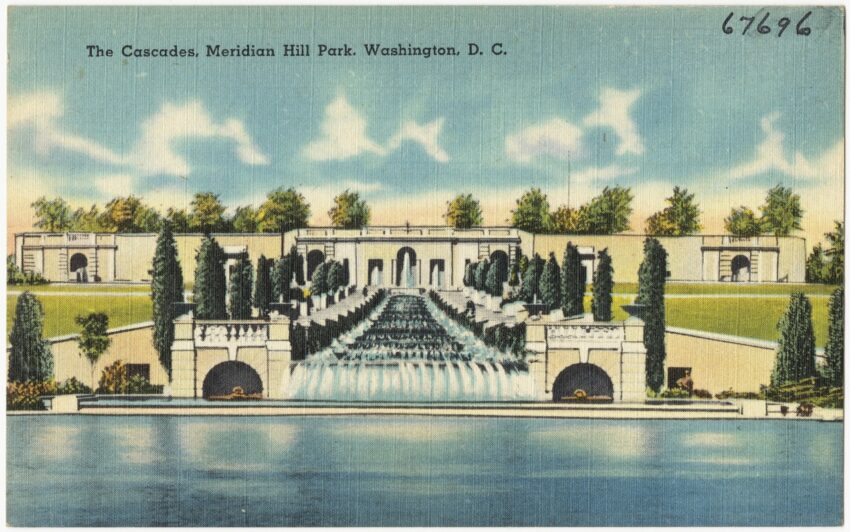 Situated in the middle of Northwest Washington, D.C., one and a half miles directly north of the White House, Meridian Hill Park is one of the most unique parks in the National Park system. It is listed on the National Register of Historic Places, October 25, 1974, and as a National Historic Landmark, April 19, 1994.

In 1936, Meridian Hill Park officially opened. By the time it was completed it had taken 26 years and almost 1.5 million dollars to complete, held 5 statues and memorials – one for a U.S. President, and was designed as a formal park, in the continental tradition, as opposed to the natural mode.

The memorial to Dante Alighieri was the first statue placed in Meridian Hill Park. It was dedicated in 1921, on the 600th anniversary of Dante’s death. The statue was given to the United States by Carlo Barsotti, president of the Dante commission of New York. Created by Italian Ettore Ximenes, it is a replica of the Dante statue in New York City. The statue is twelve feet high, and the pedestal is 9 feet high. The statue shows Dante wrapped in a long cape, with his book Divine Comedy under his arm. It stands halfway down the hill on the east side of the lower park. Located in what was originally referred to as Poet’s Corner on the east side of the lower park, the statue is situated at the side of a walkway, with benches surrounding the statue.

The Joan of Arc statue was the second statue dedicated in the park and at the time of the statue’s dedication the wall and cascades had not been built. Portraying Joan of Arc in armor, looking toward heaven with her sword held high, the statue is a replica of the one Paul Dubois created in 1896 that stands in front of the Rheims Cathedral. The inscription on the front of the statue reads:

The Serenity memorial is dedicated to Navy Lieutenant Commander William Henry Schuetze. It was given to the United States by Charles Deering. Deering and Schuetze were classmates at the U.S. Naval Academy in Annapolis, Maryland, and graduated in 1873. The memorial was accepted in 1924, and it was placed in the park in 1925. There is an inscription in the front on the base of the statue reading:

The memorial to President James Buchanan sits in the southeast corner of the park near the corner of Fifteenth and W Streets, and directly across the lower Sixteenth Street entrance. The Memorial was funded by a bequest from Harriet Lane Johnston, Buchanan’s niece. Congress accepted the funds for the memorial in June 1918. It took another 10 years to finish the memorial.

James Buchanan (1791 – 1861) served as the 15th President of the United States. His career included being a U.S. Representative and Senator, Minister to Russia, Secretary of State under Polk, and Minister to Great Britain under Pierce. However, his presidency was marked by strife in the Kansas Territory, and the Dred Scott Supreme Court case. Contentious debate led up to the acceptance of the Buchanan Memorial gift.

Harriet Lane Johnston (1830 – 1903) was President Buchanan’s niece and acted as the First Lady during his presidency. Upon her death she bequeathed $100,000 toward the construction of a memorial to her uncle. However, if Congress failed to accept the bequest within 15 years, the money would revert back to her estate. Congress made provision for a site and approved the Memorial on June 27, 1918.

The Buchanan Memorial was designed by Hans Schuler, sculptor. The architects were William G. Beechers and J.B. Wyatt all of whom were from Baltimore. The walls are made of white marble. The figure of James Buchanan is made of bronze, and centered on the back wall of the memorial. Buchanan is shown seated in a chair and holding documents in his left hand. The seated figure of James Buchanan is 9’ 6” and sits on a marble pedestal. Flanking the Memorial are two allegorical figures of Law and Diplomacy carved in marble. And a quote: The incorruptible statesman whose walk was upon the mountain ranges of the law.

At the bottom of the cascades and at the park’s southern exedra is an armillary sphere that was placed and dedicated in 1931. The bronze sphere, 16’ in circumference, was engrave “Given to the Federal City, MCMXXXVI, for Edith Noyes”. The armillary was mounted on a granite pedestal three feet in height. Within the sphere were Roman numerals marking the hours of the day. In the center was a winged figure of a child greeting the sun.