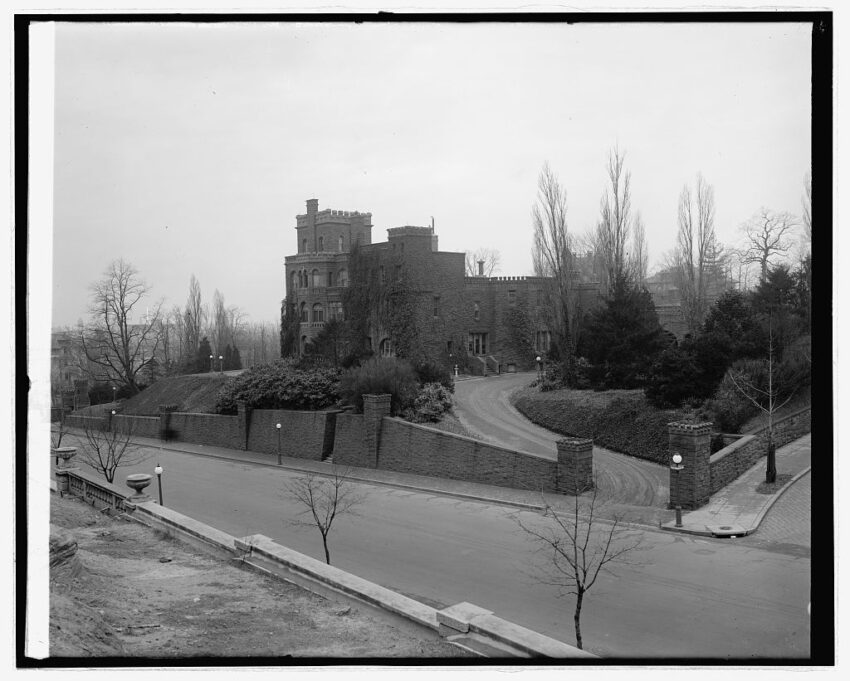 When Meridian Hill Park opened in October 1936 there were five memorials in the park. Mary Foote Henderson was influential in getting a park placed in the neighborhood and advocated for funds for the park construction for more than 20 years. After she died in 1931 many people, including the park designer, supported the idea of statue or memorial to Mary Foote Henderson, but she never got one.

Today there are four memorials in the park: Dante, Joan of Arc, Serenity, and James Buchanan. There was an armillary sphere placed in the park in 1931 that has been missing since the 1970s.

The Dante statue was the first statue placed in the park and was dedicated in 1921. It is located in the lower park on the 15th street side. The figure stands 11 1/2 feet tall and is made of bronze by sculptor Ettore Ximenes of Rome. The statue was presented to the United States on the 600th anniversary of Dante’s death by Carlo Barsotti, a New York editor, in recognition of Italian Americans living in New York State.

The Joan of Arc statue is a replica of a statue that stands in front of the Reims Cathedral. It was dedicated in 1922 and placed in the middle of the grand terrace. It is the only equestrian statue of a women in the nation’s Capital. The Joan of Arc statue was given to the United States by a group of women, Society of French Women of New York, and is dedicated to the women of the United States.

Serenity, placed in 1925, placed on a secondary path of the upper park on the 16th street side. The sculpture was made by Jose Clara. Serenity was dedicated in memory of Lt. Commander William H. Scheutze, by fellow West Point classmate Charles Deering. Charles Deering and William Scheutze went to West Point together, and Scheutze died in 1902 in Washington, D.C.

Although not part of the park’s design team, Mary Foote Henderson (1841-1831) was crucial to the development of the park.

She and her husband, Senator John Brooks Henderson, moved into Henderson Castle, also known as Boundary Castle, in 1888. John B. Henderson was a former Senator from Missouri (1829-69), and Mary Foote Henderson was a prominent social figure and successful real-estate operator in Washington.

She advocated for the Executive Mansion to be moved here. In the 1890s there was a push to move or renovate the White House with the thinking that it was just too small. Mary Henderson had architect Paul Pelz draw up plans for an Executive Mansion that was more suitable, in her estimation. That plan was not accepted. After the park land was bought by Congress in 1910, Henderson advocated for the Lincoln Memorial to be placed here. She got John Russell Pope to draw up plans for the hill.

Mary Henderson died in 1931. After her death some people suggested a memorial or the renaming of the park for her – this was quickly stopped. In the meantime, the park construction continued and the park officially opened in October of 1936.

Across from the park, the Henderson Castle became at one point a casino – and a nuisance to the neighbors; then became a boarding house until it was torn down in 1947 and Beekman Place condominiums were constructed on the former site of the Castle. The only thing left of the property is the red-stone wall that runs up 16th street to Belmont.

The idea of a park at the site goes back to the 1901 McMillan plan for the city. The plan proposed a park on both sides of 16th Street at Meridian Hill in recognition of the site’s panoramic views. Much of the land was owned by Mrs. Mary Foote Henderson. In 1910 Congress approved the purchase and bought the land for $490,000.

The original plans for the park were designed by George Burnap, a landscape architect who was employed with the Office of Public Buildings and Grounds, and approved by the Commission of Fine Arts in 1914. Horace Peaslee (1884-1959) took over as lead architect of the Meridian Hill Park project in 1917. The design team that worked to complete the park also included Ferrucio Vitale, and John Joseph Earley.

The park is divided into two primary areas: the upper park with an open mall, wooded areas that flank the mall, and a broad terrace overlooking the lower park. The lower park was designed to take advantage of the hillside and incorporated many aspects of Italianate park design. The main focus of the lower park is the 13-basin cascade and reflecting pool.